For many years now debate has raged between advocates of the two extremes of training for middle distances. We have had athletes who have been on well over 160km a week running great times in 1500m and also some running very fast off a much smaller volume of in some cases less than 100km a week.

Both extremes of training can work for an athlete. What the high volume athlete lacks in intensity can be ‘made up’ from the benefits of the slow stimulus of volumes of aerobic running. What the lower volume athlete lacks in volume can be ‘made up’ for with extra intensity. There are trade-offs and risks of both extremes however and this is essential when working out what is best for a given athlete. 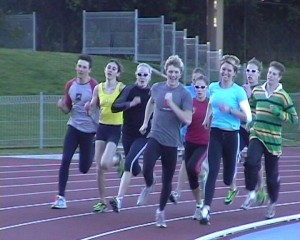 The high volume athlete runs the risk of overuse injuries and this is especially so if the training includes a high percentage on the roads. They also run the risk of lowering running efficiency at race pace if good form work is not done to compensate for the potentially damaging effects of running slower most of the time. The athlete can lose speed & ease of speed. Some would argue though that increased mitochondrial density and capillarisation brought about in a more extreme fashion by high volume training will in fact improve efficiency – as will the extra muscular conditioning of the lower legs from running slowly with minimal knee lift.

The low volume athlete because of the higher intensity will face a much higher risk of overtraining & burnout both mentally and physically. I know of athletes whose immune system has let them down and they became repeatedly sick because of a the steady regime of highly anaerobic work they were doing for most of each year. I believe athletes don’t last long like this, they have short careers.

Many of the best athletes in the World that lasted for the longest were in fact higher volume athletes like John Walker.

I believe the answer to the debate is to do both , periodize the year smartly, build to high volumes in the offseason on softer varied surfaces, be cautious with highly lactic speedwork save it for the pre-comp period. Let athletes aim for goals that are within the next 3 months XC races etc. But in base building periods train at intensities that are certainly well within the coping capacities of the athlete. Do good running form – “ease of speed” development sessions most of the year but keep the volumes and intensities at a level that fits with the volume the athletes are doing. By intensity I mean lactic intensity eg 4 x 150m at high speed is ot near as intense as 4 x 200m at the same speed. The extra 50m puts the athlete into the lactic zone uch more just like 4 x 300m at same speed would be much more intense again. Speed can be developed and maintained safely in term of musculoskelatal injuries from sessions of faster shorter reps with a total session volume of reps of less than 1000m eg 4-6 x 150m at a good speed with plenty of rest is an effective speed development and form workout that is not that intense (especially if rests are longer like in excess of 5min)

With sessions like 4 x 2000m rest 3min there are many ways to run it.
They can be run at 5000m pace or faster i.e as hard as the athlete possibly can.
They could also be done at 10000m pace which is a bit above Anaerobic threshold pace. The 10km pace version is much more sustainable over many months of base training and can easily be preceded by a long warmup and a long warmdown. The faster eyeballs approach to the session is certainly not something that an athlete can sustain for many months ven though gains in Vo2max may be high. Training is all about having optimal adaptation not just quick adaptation. Sometimes slow adapatations from many areas can add up to elite performances because the athlete can be sitting at a level where just 2 months of comp prep intense training combined with racing can lift them to a super high level FROM what was a pretty low intensity regime of significant volume.

I believe now that especially with female athletes transitioning from juniors to seniors that we need to increase the volume & be cautious with the intensity but continue the speed development. Most will last better as long as their bodies suit it on 100km a week of steady running than 60km of hard fast running.

It is essential that athletes all do both a volume that their biomechanical structures can handle and the intensity that their physiology can cope with. Eventually their ability to maximally adapt to both at the right time is the key to optimal performances in MD events.

Loving their training & variety of stimulus is the key. Putting enough solid work in that the effects over a longer period of terms unveil unexpected improvements in performance when the time is right.